The 458 SOCOM has gained popularity in recent years and is a large round that was built to be shot from a modified AR-15 upper but a standard AR-15 lower.

The 458 SOCOM is a chunky round and the first time you lay your eyes on one in person you’ll be impressed.

The 458 SOCOM round is one of the newer rounds that we have written on. So let is jump into the overview.

The general purpose of developing the 458 SOCOM was to create a round that was completely compatible with the M4 Carbine but have more stopping power than the 5.56 NATO.

The 458 SOCOM in its final form is a lengthened .50 AE case. Even the original prototypes bore the .50 AE headstamp which caused confusion initially because the case is longer and has a narrower rim.

This cartridge is a great brush gun as well as a low-velocity home defense cartridge.

Most of the bullet weights range from 300 to 500 grain with several major manufacturers making factory ammo this is definitely a good contender for many situations.

The 458 SOCOM cartridge was developed largely due to the lack of powder charge in the 5.56 NATO round.

After talks between special forces troops after Operation Gothic Serpent in Mogadishu, they determined they needed a cartridge with more power because the Somalis they were fighting would chew Khet all day, which curbs appetite and increases pain tolerance making it seem like the 5.56 NATO round was more ineffective than it truly was.

This 458 socom ammo load consists of a 300-grain JHP which accelerates to 1,866 FPS from 16″ barrels. Accuracy from our test upper averages 1.6″ groups @ 100 yards from bags. Exceptional terminal performance is achieved at this velocity. This round’s jacketed hollow point passes through two layers of leather and 26″ of standard FBI density ballistic gelatin.  Results from the field show that this projectile performs well on Whitetail at velocities as low as 1,200 FPS.

This is our most popular 458 socom ammoload as it offers accuracy, power, and terminal performance- all at a very competitive price.  This is actually the load that allowed Steinel Ammunition Co. to expand from our founder’s basement into our current facility.  While 458 SOCOM is not currently a SAAMI adopted cartridge, it continues to grow in popularity year after year.

Check out our reviews for testimonials and pictures of in-the-field performance. 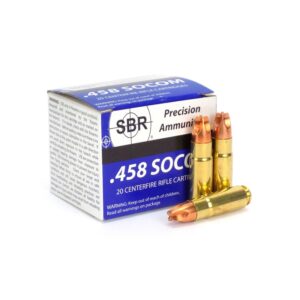 Check out our SOCOM eBook here

Our other 458 SOCOM loads found here

There are no reviews yet.